The Brexit farce continues and it’s not going to end well . . .

October 10, 2019
I am conscious that I haven’t posted here for a while and there’s reason: the only thing I would like to write about at present (not having bought a new laptop for a week or two, or come up with any more trivia about my father’s life — possibly — as 007 both of which topics usually make for scintillating blog posts) is the sheer farce that Brexit has become. And for many reasons it is quite pointless making any comments.

For one thing what is happening is changing daily, but for another this is one of those issues in which you are firmly on one side or that other, with both sides becoming more polarised by the hour. And in the nature of things in such punch-ups the one side will never listen to the other: but more pertinently they don’t want to listen. The name of the game is not seeing whether you might persuade the other side that they are wrong and you are right. It is seeing who can shout loudest and drown out the other. Well, I’m not interested in that at all.

(As it was I voted Remain that ‘on balance’ remaining a member of the EU was by far not just in Britain’s best interests but better for Europe as a whole. I do feel the EU must be careful how it evolves and, vitally, must ensure it carries the vast majority of those who live in EU member states with it when it does make changes. Not doing that, proceeding on a de haut en bas basis, will cause a great deal of trouble in the future.

It would be pointless to write much more about the Brexit debacle and the state it is in, if I’m honest, because whatever is recorded here will be out of date within hours. But there’s one aspect of all this which I do think is worth commenting on but which in nothing I have read I have seen commented on. It is simply that there is something going on — in Britain, in Europe, in the US, in the world — of which Brexit, the continual bizarre behaviour and decisions of Donald Trump, the situation in both Russia and China where ‘a hard man’, and the protests in Hong Kong, are just aspects and symptoms.

I think I have alluded to it before (and can’t be arsed to go and check) but it is as though the force of enlightenment which has been growing over the past 70 years is now encountering resistance. I don’t want to come across as some semi-illiterate part-time autodidact, but from the intellectual bits and bobs I have scavenged over the years there seems to me to be a distant echo in the developments of the past ten to 15 years (and I would really not want to push this one too far) of Hegel’s notion of ‘thesis, antithesis and synthesis’, later adopted and adapted by Marx.

In fact, it is quite possible to sidestep any heavy philosophical notions and not quote Hegel (useful if you haven’t read a word of Hegel and don’t want to look like a prize prune by misrepresenting him) and simply mention the Chinese notion of yin and yang the (that night follows day as day follows night) and the Tao, or the long-acknowledged realisation that ‘everything carries the seed of its own destruction’.

In order to give a little more detail on that last idea, I’ve just looked up quotes to see ‘who said that’ and it would be faster to list all those who didn’t say something along those lines, but here’s one from Mark Twain with which you’ll have to make do:

‘Every civilisation carries the seeds of its own destruction, and the same cycle shows in them all. The Republic is born, flourishes, decays into plutocracy, and is captured by the shoemaker whom the mercenaries and millionaires make into a king. The people invent their oppressors, and the oppressors serve the function for which they are invented.’

Yes, there have been problems but looking back over the past 70 years in Europe, one might be forgiven for thinking that overall the general direction of social and political sensibility was towards greater liberalism — in the non-political sense — and, for want of a better word, enlightenment. Certainly, it might seem to be two steps forward, then one back, but ‘progress’ was made. But using that word ‘progress’ draws attention to the essence of one problem: that one man or woman’s ‘progress’ is another man or woman’s ‘abomination’. And it is not a question here of deciding who is right and who is wrong — a debate as futile as trying to agree which is the better football club, United or City? — but of the attitude of each side to the other.

Sometimes part of the difficulty is as basic as that the one side does not even care to acknowledge that however abhorrent it might think the attitude of the other is, it is — because in a democracy it must be regarded as — equally valid.

But ironically that attitude — my attitude — is essentially a liberal one and others (though not necessarily you) might say ‘stuff and nonsense, you lily-livered pinko!’ (followed by, possibly, ‘no surrender!’)

As for Brexit, well, it is not looking good, not for Britain, Ireland or the EU. Everyone will be a loser unless Britain leaving the EU can be sensibly managed and it is not looking as though that will happen. Well, that at least is my view.

Part of the problem is that on the Brexit side there are those who want Britain to leave the EU, but to do so in a managed and orderly way. And there are those gung-ho individuals (many of whom haunt the comment pages of 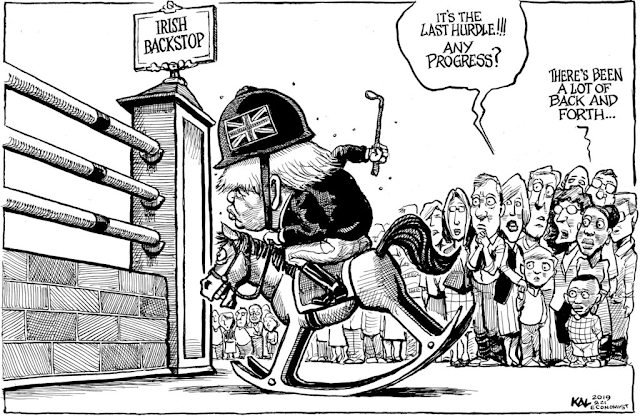 the Daily Telegraph where I trade insults with them) who take the attitude of ‘let’s have a clean break and make Britain great again’. So even on the Brexit side there is disagreement.

There has been all kinds of shenanigans in Parliament and our Prime Minister — our current Prime Minister, one Boris Johnson — has painted himself into a corner from which there would seem to be no escape. He has vociferously vowed that Britain will leave the EU by October 31 ‘do or die’, i.e. whether a withdrawal agreement has been made with the EU; on the other hand Parliament has made it law (after through his own incomprehensible stupidity Johnson lost his very slim majority in the House of Commons) that Britain cannot leave the EU unless a withdrawal agreement is in place.

Furthermore, Johnson is fighting a rearguard action against a new party founded by Nigel Farage, the Brexit Party, which will hoover up support from the Tories if we don’t leave by October 31 and Britain is forced to ask for ‘an extension’. Everyone expects a general election to be held in November if we have not left the Tories (in my view) are toast. Ironically, given just how unpopular Jeremy Corbyn, the equally hamfisted Labour leader is in the opinion polls, the Conservatives are ahead by, I think, an average six points.

I am pretty certain that Johnson will not manage to get deal by October 31 (in fact, for technical reasons it must be struck by October 19) and that the coming general election, many voters who previously voted Tory will back Farage’s gang of wankers, other ‘one-nation’ Tories — well, some of them — might throw in their lot with the Lib Dems (who will make it a manifesto pledge that they will revoke ‘Article 50’, the clause in the EU constitution (?) which allowed Britain to announce its withdrawal from the EU).

Then because of that manifesto pledge and in view of Corbyn’s half-baked policy on what to do about Brexit, quite a few Labour voters will pitch in with the Lib Dems and the result of the election will be a hung parliament. What happens then is anyone’s guess. And I’m not going to guess because I have to drive into Bodmin for various reasons and time is getting short. And I’m sure I haven’t told you anything much you didn’t already know. But I wanted to get this post entry finished and posted.

Letter (email) to my daughter

By chance, I came across this, a ‘letter’ (actually an email) to my daughter when she was at the end of her first year at university and unhappy in the course she was in. Because she was born in August, she was young for her year. At the time (about May, 2014) I was on holiday in Mallorca and had stopped off for a lager and a cigar at a café somewhere or other of the inland towns. I had with me my works laptop (I can’t think why but I did). My daughter messaged me because she was in a complete tizzy about whether even to carry on with her uni course or not and was very unhappy. About 1,300 miles away I was trying to advise her and cheer her up. This is the email I sent.

Quite why I am posting it here and why I think it would be OK to do so, I don’t know (although I know none of my family reads this blog) but it does occur to me that what I have to say is in some ways also generally true.

I have not altered it except where indicated in [square brackets]. I feel it would be dishonest to d…

Crisis? What crisis? This one, matey, this one!

We here in Britain are stuck in a truly bizarre age: for once the observation that ‘the country is split’ isn’t actually just a silly, self-important middle-class exaggeration describing, for example, the fact that Wilf next door really thinks English rugby is in for a golden age and can look forward to great things whereas John and William down at the club think that’s nonsense. It is far more serious than that: the country is well and truly split down the middle and it’s not going to end well because there is no way it can end well. And that worries me.

I’m not just talking about Brexit, either, although that is the root cause.

At the moment the government wants to call a general election, and the Opposition is buggered if it is going to commit suicide on national scale. The government is having a lot of trouble getting its ‘deal’ through Parliament (the initial withdrawal agreement between it and the EU outlining what is what, for example how much Britain should contribute to the EU …

On the road again, again

It’s a bit of a stretch entitling this entry ‘On the road again’ as it involves neither amphetamines, superhcharged sports cars, long straight roads stretching into far distance or me escaping life and a futile existence. In fact, I have only taken off from deepest, darkest North Cornwall to visit more civilised East Sussex for a funeral. And rather than spend days and weeks on the road, hooking up with equally disillusioned young women and sparked out, druggy lunatics, the journey from St Breward to my Travelogdge here near Hailsham took only - only – six hours (a little longer than usual as I spent the usual hour hunting down an Asda, this time to get a white shirt).

But it is good to get out and about. The funeral is for the widow of one of my stepmother’s former friends from the BBC, one of her more acceptable friends I have to add, because some of them can be a pain in the arse (not that I tell them – I can be as two-faced as the you).